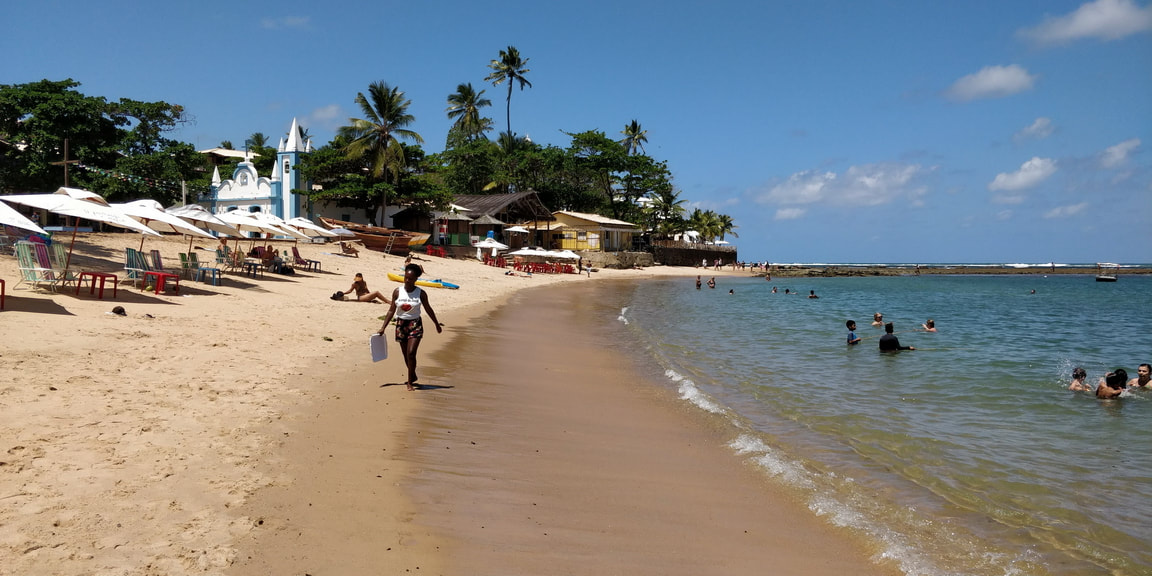 The Praia do Forte challenges the Morro de São Paulo as the favorite beach in the region of Salvador.

​With less natural beauty, it benefits from the easiest access and greater commercial structure.

In great prominence for its whiteness, in the beach of the port, the church of San Francisco is a modest construction, apparently the work of the fishermen in 1900.
It’s a nice element and it denotes great care of conservation.

14 kilometers long, the beach provides a big diversity of options from hiking to diving, or just to bath in the natural pools or the open waters.

The big movement is in Praia do Porto, by the chapel, and the best pools seem to be in Papa-Gente, to the north

​In high tide, the hidden reefs may be dangerous.

Some of the biggest attractions on Bahia’s beaches are the natural pools. I confess that, after having been in Maragogi and Porto de Galinhas, none of the ones I saw impressed me much, however, I did not go very far at Praia do Forte, and I did not see the famous pools of Papa-Gente.

The Salvadoran coast is a privileged nesting site for turtles (and whale breeding). In 1980 the Tamar Project was created to study and protect turtles. Of the 21 bases scattered throughout the country, Praia do Forte is the most interesting and well-equipped to visit, with the extra show in December and February of liberation on the sand by the biologists of the newborn turtles.

The heart of Praia do Forte is the Vila, former meeting point of fishermen when the region was just a village. The so-called “centrinho” with a beautiful avenue closed to the traffic, has charm, with the shops, bars and restaurants spread under the vegetation that gives comfort to the walk. It will also be the nightly point of the beach, but this was not noticed by having left early.

Filipe, our guide, was a learned man who lives intensely the problems of his Brazil. He referred us to the close connection between the “Praia do Forte” project and the more or less discrete business of Brazilian politicians.

With no time or willingness to take notes, I tried at home to find the references that would allow me to confirm and identify that link.

I did not make it! There is reference to the powerful Padilha de Sousa family, but the project seems to have relied almost exclusively on Klaus Peters, a Brazilian of German origin, whom I could not find political connections with.

What I found were references to a natural park that got his name, right at the entrance of the project. Even without having ventured into the exploration of its more than 300 hectares, it provided us with some of the most beautiful photos of the tour.