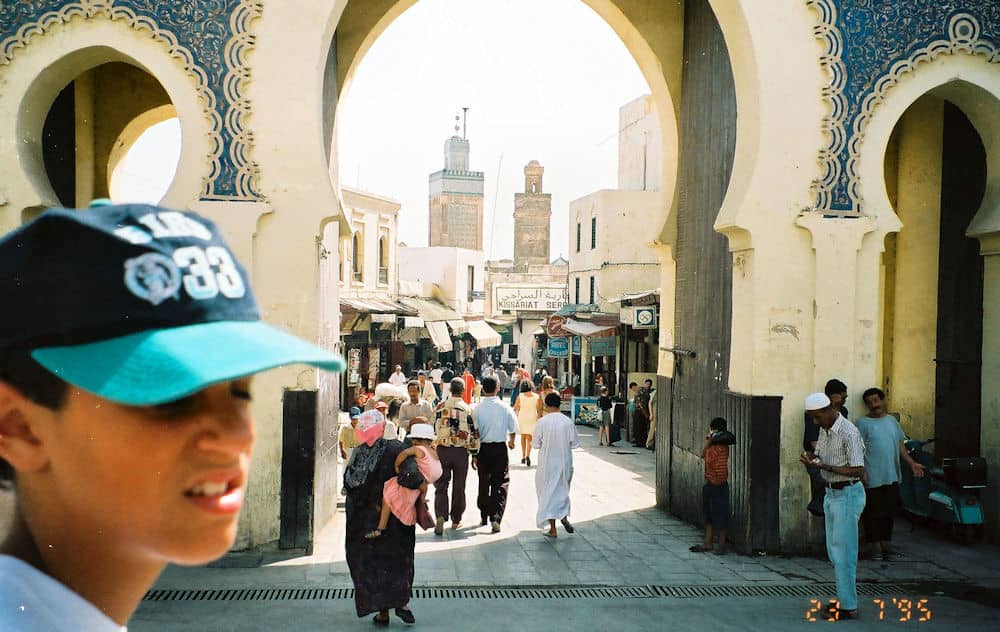 Till now, I visited several medinas and souks, in different towns and countries, but no one repeated the strong impression of my first visit to Fes, in 1982. The strong impression of the narrow roads and small houses made me forget the whole town and its beauty with the white houses, descending the sunny slopes of town.

I had to come back, and my second impression was totally different, more acquainted to the size and conception of the medina, and more attentive to the town itself. But one thing remains – Fes is my favorite town in Morocco.

​The Medina, of course

​In Fes I felt, for the first time, out of scale (it happened again, in opposite direction, 10 years later in Florida.

The Medina may seem so small as some medieval places we know in Europe, but plenty of life, in a seemingly impossible way. A maze that I can’t describe – only seen and felt.

The fire consumed, some years ago, the central area of the Medina, which has been rebuilt respecting the proportions but not the look.

It’s a pity. However, everything around looks the same, and the visit (always with a local guide) will justify your day. The modern part of town is also interesting, but the Medina is unique.

I’ve been in Fes twice, with almost 20 years separating the trips.

The visits to the medina were accompanied by different guides, obviously, but, curiously, when entering the leather tinting area, they both used the same joke: “Chanel n.5 perfume”.

It’s not a beautiful show, and it is a really awful smell, but it is real, and should be seen. There is progress: in our second visit the guide distributed each one a mint branchlet, that, placed under our noses, disguised a little the strong Chanel.

I mean its door, and that’s all you’re allowed to see, inviting you to use your imagination. However, all that secluded opulence seems well accepted by the people. Their problem…

Squeezed in the narrow streets of the medina, these Islamic schools risk to pass unnoticed.

Fortunately you ARE with a local guide that will call your attention. The negative point is that you are not allowed to enter in most of them, becoming restricted to a quick external look.

A pity, but we have to respect their religious rules.

Walking along the medina, you may pass without noticing by some historical buildings and places, hidden behind the displays of the sellers, or in the dark of the narrow streets.

Fountains, palaces, and medersas worth a look.

The sad thing is that non-Muslims must stay out of the religious buildings and only peeping from the doors you may have an idea of the interiors.

Back to Fes page
in Fes
| Tags: Special spot, To see