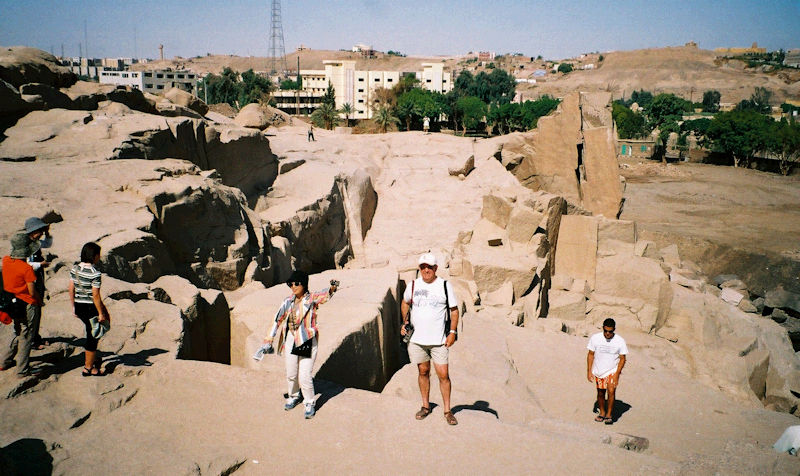 Aswan is the southernmost touristy city of Egypt, from where you may go even more deep to the south, to visit Abu Simbel.
Now the area is dominated by Nasser dam, which almost sunk Abu Simbel and Philae. Both temples were moved, and Philae is easy to visit in the lake.
However, the highlight of the place is the unfinished obelisk, still in its quarry, and helping us to imagine the trouble to send it down the Nile.

The construction of the dam raised the waters, covering, amidst other things, the temple of Philae.

Tourism was already the top business in Egypt, and the decision to preserve it was easy – an artificial island was built, and the temple dismounted and rebuilt on it. Now, a boat is need to visit it, in a short and pleasant trip.
​
I bought what seemed to be an excellent package (it was) but decided to demand some changes. It was a perfect idea. In two weeks I joined four different groups, sharing their experiences but also seeing what they were missing. The changes were simple: reverse the cruise (Aswan-Luxor and not the opposite) and replace the long stay in Hurghada by Sharm-el-Sheik.

​That gave me the chance to save a flight, reaching the Red Sea by land and to profit some exclusive advantages. For instance, after the tour of Aswan, the guide found that we were the only customers to have the Philae Temple in the program.

So, while everybody else returned to the cruise ship, we and the guide entered a small boat that took us across the lake to that jewel that is the Philae Temple. The visit was quick and easy, but I wouldn’t miss it for nothing. The protection of the tourists is carefully assured as discreetly as possible. Sometimes they cannot be so discreet.

Erecting the obelisks should have been a hell of a job.

If we remember that most of them were cut in Aswan, and carried down the Nile, the work turns Cyclopean. The cutting of the Unfinished Obelisk in the Northern Quarry of Aswan, stopped when a crack appeared, as it was being extracted from the rock.

It would have weighed over one thousand tons, and would have been the largest piece of stone ever handled. Now it became the first tourist attraction in Aswan, making us try to imagine how would they move it.

Located near Aswan, the world famous High Dam was an engineering miracle when it was built in the 60s. It contains 18 times the material used in the Great Pyramid of Cheops.

The Dam is 11,811 feet long, 3215 feet thick at the base and 364 feet tall. Today it provides irrigation and electricity for the whole Egypt and, together with the old Aswan Dam built by the British between 1898 and 1902, 6 km down river, wonderful views for visitors.

Back to Aswan page
in Aswan
| Tags: To see